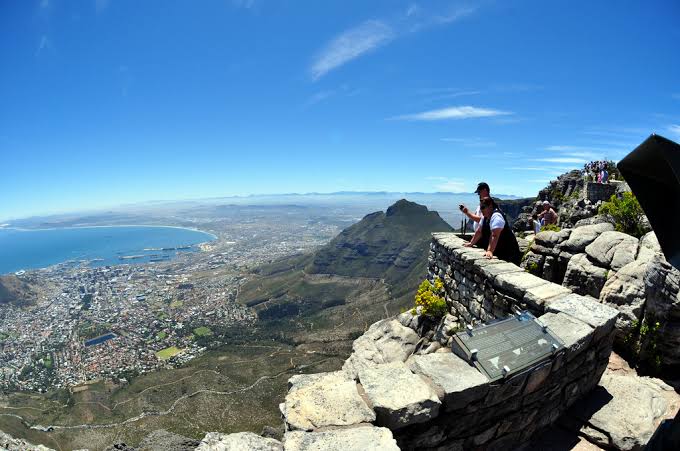 Table Mountain(Tafelberg ) is a flat-topped mountain making up a prominent landmark overlooking the city of Cape Town in South Africa. It is a special tourist attraction, with many visitors using the cableway or hiking to the top. The mountain produce part of the Table Mountain National Park, and part of the lands formerly ranged by Khoe-speaking clans. It is home to a large group of mostly endemic fauna and flora. Its tabular shape results from nearly horizontal layers of sandstone which is exposed by vigorous wind and water erosion. The distinctive-looking mountain is one of Cape Town’s most noticeable landmarks and is a popular tourist attraction that offers hiking, camping, and other activities.
Table Mountain’s stark, scarred, 2-mile- (3-km-) long northern face contrasts with the fertile summit plateau broken by small valleys and streams. Two subsidiary peaks are removed from the main mountain: Lion’s Head (2,195 feet [669 metres]) to the northwest, declining northward to Signal Hill (Lion’s Rump); and Devil’s Peak (3,281 feet; previously Windberg, or Windy Mountain) to the northeast. To the west, along the Atlantic coast, Table Mountain is formed by a series of peaks referred to as the Twelve Apostles.
Table Mountain has its own cloud cover (the Tablecloth), forming quickly when the wind is in the southeast and mainly responsible for the lush plateau vegetation. Five mountain reservoirs catch the rainfall that is brought by northwesterly winds in winter (ranging annually from 60 inches [1,525 mm] at the summit to 22 inches at the base). Abundant vegetation consists of 250 species of daisies,disa orchids, and silver trees; Animal life also includes tahrs (Himalayan goats) that are descended from escapees of a local zoo. There are a cableway (built 1929) and over 350 classified routes to the top. The highest point is Maclear’s Beacon (3,563 feet), which is known as stone-cairn trigonometrical beacon placed on the northeastern face by Sir Thomas Maclear in the 19th century.

Table Mountain National Park, previously known as the Cape Peninsula National Park, is a national park in Cape Town, South Africa, declared on 29 May 1998, for the purpose of protecting the natural environment of the Table Mountain Chain, and particularly the rare fynbos vegetation. The park is controlled by South African National Parks. The property is added as part of the UNESCO Cape Floral Region World Heritage Site. 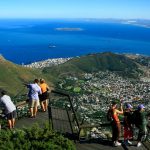