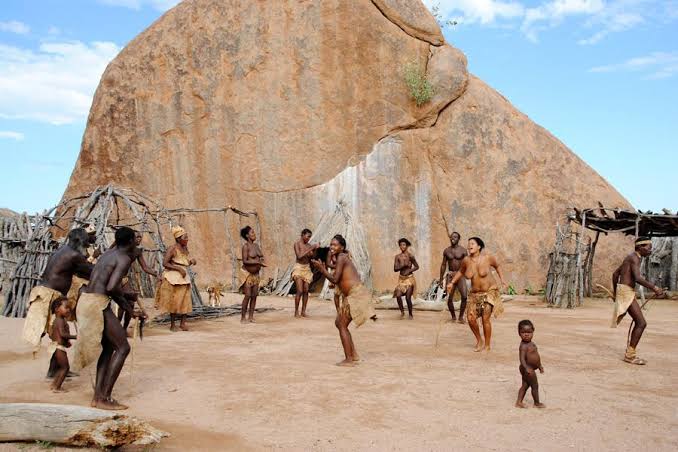 Culture in Namibia is a blend of many different people and its culture and customs have absorbed both African and European elements and fused them into a blend of the two. The Namibian majority still has a substantial number of rural inhabitants who lead largely impoverished lives. It is among these people, however, that cultural tradition survive most strongly. With just 2.1 persons per square kilometer and a population of 2.5 million, Namibia’s different cultures span an impressively diverse population for what is a sparsely populated country. 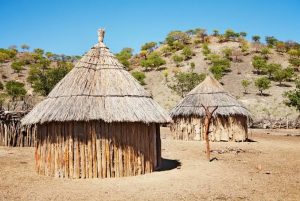 From the Bantu-speaking Ovambo and Herero tribes (the latter of which are admired for their colorful Victorian dress) to the Damara minorities and nomadic San Bushmen, Namibia boasts cultural and historical flavor in spades. German colonization left its own imprint on this
Southern African nation with German being a widely spoken language today and German architecture and cuisine featuring prominently. Namibia’s diverse and, at times, harsh climate contributed to its colorful history with skirmishes, international and national, reflected in much of its modern history. Around 50 percent of Namibians belong to the Ovambos, most of whom live in the northern regions of the country. 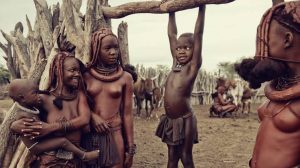 Although missionaries turned most of the Ovambo into practicing Christians, specifically Lutherans, many still follow traditional customs. Families still live in homesteads, groups of huts enclosed by wooden fence poles. Each hut serves a particular purpose as a bedroom, kitchen, or storage room.
Religion in Namibia is dominated by various branches of Christianity, with more than 90 % of Namibian citizens identifying themselves as Christian. According to the United States DRL, in 2007 up to 75% were Protestant, including as much as 50% Lutheran.
Foreign missionary groups operate in the country. The Constitution provides for freedom of religion, and the Government generally respects this right in practice. The US government received no reports of societal abuses or discrimination based on religious belief or practice in 2007. Islam in Namibia is subscribed to by about 9,000 people, many of them Nama. Namibia is home to a small Jewish community of about 100 people.
Namibians are of diverse ethnic origins. The principal groups are the Ovambo, Kavango, Herero, Himba, Damara, mixed-race (Coloured and Rehoboth Baster), White Namibians (Afrikaner, German, Swedish, British, and Portuguese), Nama, Caprivian (Lozi), San , and
Tswana . The Coloureds and Basters share similar genealogical origins and cultural attributes (such as home language) but nonetheless maintain distinctly separate communal identities, as do most white Namibians and black Namibians, respectively. By formal estimations, there are 11 ethnic groups in Namibia, although realistically each of these is actually a collection of smaller ethnic groups that share similar languages and customs.
The minority white population is primarily of South African, British, and German descent, with a few Portuguese. About 60% of the whites speak Afrikaans (a language derived from the 17th century Dutch), 32% speak German , and 7% speak English .The Ovambo make up about half of Namibia’s people. The Ovambo, Kavango, and East Caprivian peoples, who occupy the relatively well-watered and wooded northern part of the country, are settled, farmers and herders. Historically, they have shown little interest in the central and southern parts of Namibia, where conditions do not suit their traditional way of life.
After Namibia gained independence from South Africa in 1990, the new government of the country allowed only the English language as the official language and mentioned the same in the constitution of the country. The language is now used in the government administration of the country and is the medium of instruction in schools and universities. However, the schools of Namibia are facing a shortage of teachers proficient in the English language, and a report reveals that 98% of the country’s teachers lack sufficient training in the language. 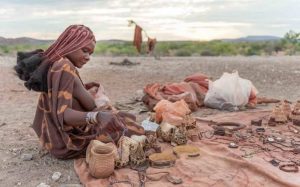 Greetings are especially important to Namibians. Namibians tend to be indirect communicators. Conversations almost always begin with a hello and how are you doing. It is generally considered impolite to just rush into trying to obtain the specific information you need. Extended greetings and handshakes are very important in most Namibian cultures. When food and drink are offered, it is polite to accept. There is a general emphasis on emotional restraint in public, and public displays of affection between spouses or lovers are frowned upon, especially in rural areas.
Along with a curtsy, another traditional show of respect is for the greeter to shake with his or her right hand while at the same time touching their right elbow with their left hand. The curtsy and the elbow touch performed together are very common in the northern regions, especially the rural areas. It is considered common courtesy to greet people in. It is considered disrespectful to not greet people.
In Namibian, Most households are not nuclear families but contain otherkin as well. The head of the household manages domestic finances, makes important decisions, and organizes productive activities. Parents receive substantial help with child-rearing from other family members. It is not unusual for children to live with other relatives if the parents have work obligations, the child needs to be closer to school, or a relative needs a child’s help. Most boys and girls attend primary school, although sometimes they stay at home to help with the livestock or crops.
In a Namibian culture, the wealth of a family is measured by how much cattle it has, and families live a semi-nomadic life, following grazing and water sources for their livestock. In the rural communal areas, men and boys generally care for livestock, build and maintain homesteads, plow fields, and contribute some agricultural labor, while women and girls do most of the agricultural labor, food preparation, childcare, and household work.
Culture can also be seen in the clothing that they wear. Women in different areas of Namibia do dress differently from each other. Some women wear traditional clothing while others wear Victorian-styled clothing because of the influence of the missionaries in the area. Herero women wear traditional style clothing and dress with traditional jewelry. You can also tell that one woman is different in rank by just observing their hairstyles. A certain hairstyle can tell you the age and social status of the woman in society. What makes the Himba people unique and immediately recognizable is their appearance and especially the result of a paste that women rub on their bodies and make them look like terracotta statues. Cometosouthernafrica update.