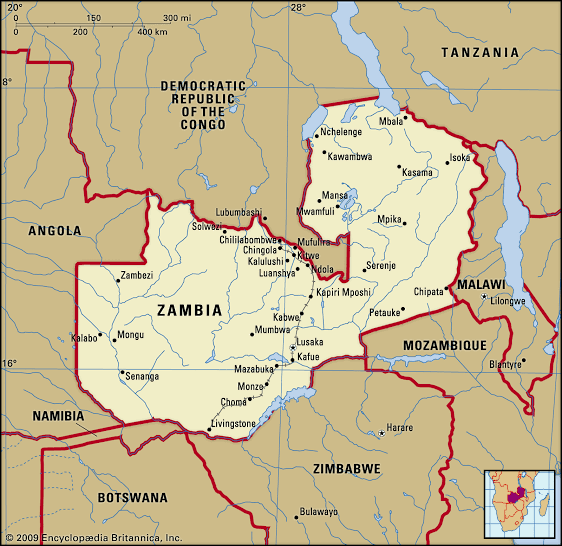 Zambia derives its name from the Zambezi River. The river runs across the western and southern border and then forms Victoria Falls and flows into Lake Kariba and on to the Indian Ocean.
In size, the country is roughly equivalent to the state of Texas, about 290,585 square miles (752,615 square kilometers). The unique butterfly-shaped boundaries are the result of the European scramble for Africa’s natural resources in the early 1900s. The capital is Lusaka. Bordering neighbors are the Democratic Republic of the Congo, Tanzania, Malawi, Mozambique, Zimbabwe, Botswana, Namibia, and Angola. 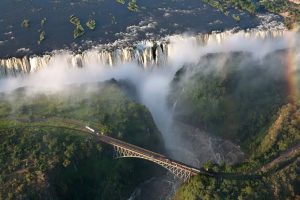 It is a landlocked country with several large freshwater lakes, including Lake Tanganyika, Lake Mweru, Lake Bangweulu, and the largest man-made lake in Africa, Lake Kariba. The terrain consists of high plateaus, large savannas, and hilly areas; the highest altitude is in the Muchinga Mountains, at 6,000 feet (1,828 meters). The Great Rift Valley cuts through the southwest and Victoria Falls, the most visited site in Zambia, is in the South.
English is the official language as the country was once an English colony (1924–1964). While many people speak English, in rural areas tribal languages are spoken, in addition to a few other vernacular languages. Each of the seventy-five tribes living in the country has its own dialects and language. The main vernacular languages are Bemba, Lozi, Luanda, Luvale, Nyanja, Tonga, and Tumbuka.

The background of the national flag is green, symbolic of the country’s natural beauty, with three vertical stripes in the lower right corner. The three stripes are: red, symbolic of the country’s struggle for freedom; black, representing the racial makeup of the majority population; and orange, symbolic of the country’s copper riches and other mineral wealth. A copper-colored eagle in the upper right corner symbolizes the country’s ability to rise above its problems.
Zambia is noted for its rich wildlife and landscapes, using those resources to promote tourism with the slogan, “the Real Africa.” The most notable landmark is Victoria Falls, known locally as Mosi-oa-Tunya, which means “the smoke that thunders.” It is one of the seven natural wonders of the world and even though it is shared with Zimbabwe, it is a source of great pride for Zambians. 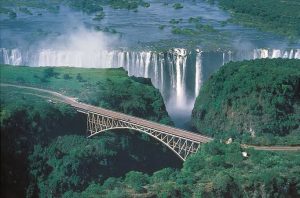 The people retain strong ties to their tribe or clan, but there is also a strong national identity. Zambia became a settling ground for many migrating tribes around 1500 to 1700, and those immigrants helped create a crossroads of culture in the country. These tribes have lived in harmony with each other for decades. When the first president, Kenneth Kaunda, introduced the slogan “One Zambia, One Nation,” it was considered a strong symbol of the country’s unified national identity.
The main tribes in Zambia are Bemba, Nagoni, Lozi, Chewa, Chokwe, Lunda, Luvale, Tonga, and Tumbuka. Most Zambians have joking relations with other tribes; the relationships go back many years. For example, a Bemba may throw verbal abuses to a Nyanja, but this is done in jest for the most part. This is an important distinction from other countries, where greater animosity exists. Zambians may consider their tribe superior to another, but there is an overall sense of unity across all groups.
Food customs vary among tribes. For example, in the Bemba culture it is taboo for a bride to eat eggs because it may affect her fertility. Another Bemba tradition is to serve the newlyweds a pot of chicken whose bones are then replaced in the pot and given to the bride’s mother. A Lozi tradition is to eat porridge off of a stone to bless the couple. Most ceremonies, including weddings, funerals, and initiation ceremonies, involve lots of food and traditionally brewed beer.

The influence of Christian missionaries is evident. An estimated 53 percent of the population considers themselves Catholic. The country’s official religion has been Catholicism since 1993 when President Chiluba officially declared it so. There are other religions, including a large Muslim population primarily in Eastern Province. This is a result of the immigration of Arabs from Dar es Salaam, Tanzania, largely due to the slave trade. There are Hindus, Jews, and Pentecostals, who, combined, comprise only 1 percent of the population. Animism is practiced by a large amount of the population, even if they are Catholic, Seventh Day Adventists, or practitioners of another religion. Animism beliefs vary from tribe to tribe, but most are based on beliefs in the power of ancestors and in nature. Some people call this witchcraft and indeed such terms as “wizards” and “witches” are used. Many areas believe that crocodiles have strong powers. Cometosouthernafrica update.