The polity rise of Basutoland, the kingdom of Lesotho 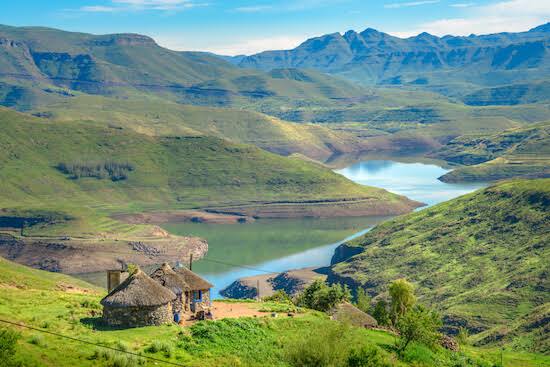 Officially the Kingdom of Lesotho is an enclaved country within the border of South Africa . Along with the Vatican City and San Marino, it is one of only three independent states completely surrounded by the territory of another country. Additionally, it is the only such state outside the Italian peninsula, and the only one that is not a microstate . Lesotho is just over 30,000 km 2 (11,583 sq mi) and has a population of around 2 million. Its capital and largest city is Maseru. The official language is Sesotho. 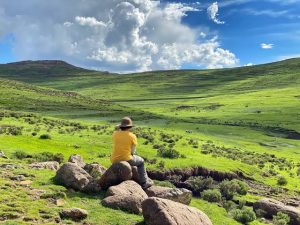 Lesotho was previously the British Crown Colony of Basutoland , but it declared independence from the United Kingdom on 4 October 1966. It is now a fully sovereign state and is a member of the United Nations , the Commonwealth of Nations , the African Union , and the Southern African Development Community (SADC). The name Lesotho roughly translates to the land of the people who speak Sesotho. 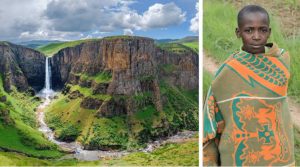 Modern Lesotho, then called Basutoland, emerged as a single polity under King
Moshoeshoe I in 1822. Moshoeshoe, a son of Mokhachane, a minor chief of the Bakoteli lineage, formed his own clan and became a chief around 1804. Between 1821 and 1823, he and his followers settled at the Butha-Buthe Mountain, joining with former adversaries in resistance against the Lifaqane associated with the reign of Shaka Zulu from 1818 to 1828.
Further evolution of the state emerged from conflicts between British Empire and Dutch colonists leaving the Cape Colony following its seizure from the French-allied Dutch by the British in 1795, and also from the Orange River Sovereignty and subsequent Orange Free State .
Missionaries Thomas Arbousset, Eugène Casalis and Constant Gosselin from the Paris Evangelical Missionary Society, invited by Moshoeshoe I, were placed at Morija , developing Sesotho orthography and printed works in the
Sesotho language between 1837 and 1855. Casalis, acting as translator and providing advice on foreign affairs, helped set up diplomatic channels and acquire guns for use against the encroaching Europeans and the Griqua people .
Trekboers from the Cape Colony arrived on the western borders of Basutoland and claimed rights to its land, the first of which being Jan de Winnaar, who settled in the Matlakeng area in May–June 1838. Incoming Boers attempted to colonise the land between the two rivers and even north of the Caledon , claiming that it had been abandoned by the Sotho people. Moshoeshoe subsequently signed a treaty with the British Governor of the Cape Colony, Sir
George Thomas Napier , that annexed the Orange River Sovereignty where many Boers had settled. These outraged Boers were suppressed in a brief skirmish in 1848. In 1851, a British force was defeated by the Basotho army at Kolonyama, provoking an embarrassing war for the British. After repelling another British attack in 1852, Moshoeshoe sent an appeal to the British commander that settled the dispute diplomatically, and then defeated the Batlokoa in 1853. In 1854, the British pulled out of the region, and in 1858, Moshoeshoe fought a series of wars with the Boers in what is known as the
Free State–Basotho War. As a result, Moshoeshoe lost a great portion of the western lowlands. The last war with the Boers ended in 1867 when Moshoeshoe appealed to Queen Victoria , who agreed to make Basutoland a British protectorate in 1868.
Basutoland gained its independence from Britain and became the Kingdom of Lesotho in 1966. Cometosouthernafrica update.

The Southern Africa Cuisines From Botswana