Zambian cuisine is heavily centered around nshima , which is a food prepared from pounded white maize . Nshima is part of nearly every Zambian meal. In addition to nshima, Zambian cuisine includes various types of stew , cooked vegetables and different types of beer . Dried fish and insects are also eaten. 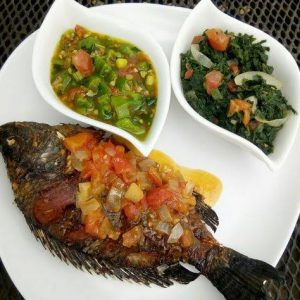 Zambia’s staple food is maize. Nshima makes up the main component of Zambian meals and is made from pounded white maize. It is served with “relish”, stew and vegetables and eaten by hand preferably with the right hand. Nshima is eaten during lunch and dinner. 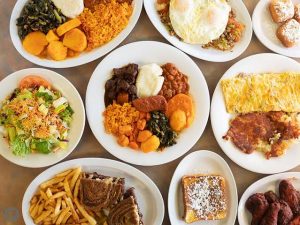 Nshima may be made at home, at food stalls and at restaurants. In traditional communities, the making of nshima is a long process, which includes drying the maize, sorting the kernels, pounding it and then finally cooking it.
The types of relish eaten with nshima can be very simple, such as chibwabwa, or pumpkin leaves. Other names for the relish are katapa, kalembula and tente . The relish made with green vegetables is generally known as delele or thelele. A unique way to create relish relies on cooking with chidulo and kutendela .
Chidulo is used in dishes made with green, leafy vegetables and also for wild mushrooms. The chidulo is made of burnt, dry banana leaves, bean stalks or maize stalks and leaves.The ashes are then collected, added to water and strained. The resulting liquid tastes like vinegar. 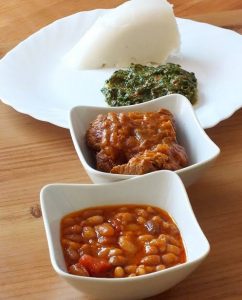 Kutendela is a prepared peanut powder made of pounded raw peanuts and is added to the chidulo sauce.
Ifisashi is another common food in Zambia. It is a type of stew, made with greens and peanuts and served with nshima. Ifisashi can be vegetarian or cooked meat can be added to the stew. Samp is also eaten in Zambia.
Kapenta , a small sardine from Lake Tanganyika has been introduced in lakes in Zambia. The fish is caught and dried to be cooked later, or it can be cooked fresh. Gizzards are also a popular delicacy in Zambia.
Various insects are also eaten. These include stink bugs and mopani worms. Cometosouthernafrica update.