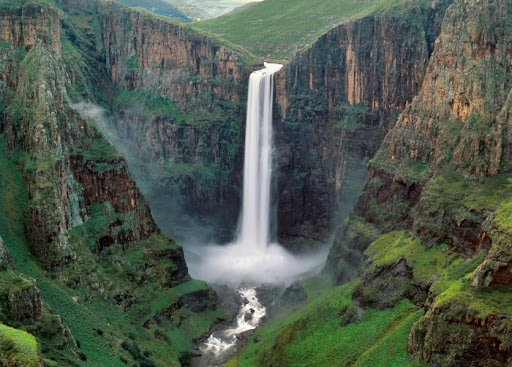 Semonkong, meaning ‘Place of Smoke’, was established in the 1880s as a refuge for Basotho displaced by the Gun War. It’s now a small, straggly town with a lovely situation among the Thaba Putsoa mountains. Semonkong’s name may refer to the frequent mist that descends on this valley town, or to either of two nearby waterfalls. The unspoiled 120m Ketane Falls are a single day’s walk or pony-trek (one of the best in the country) west of Semonkong proper.

The Semonkong Falls (also called Maletsunyane or Le Bihan, after a French missionary) are more easily accessible by a five–kilometre walk along the Maletsunyane river. This waterfall is the highest single drop in Southern Africa, plunging 200 metres into a swimmable pool whose stunning natural scenery is unspoiled by anything man–made. Semonkong Falls are most spectacular in summer when the flow is highest, but in winter the water freezes, spraying the rocks with ice and forming a stunning ice cage over the Pool.